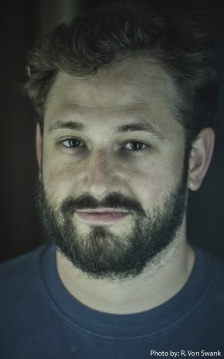 My research focuses on the interaction between nutrient transport mechanisms and biological systems in the surface ocean, and its role in biogeochemical cycling in a changing world. I have experience in applying innovative geochemical approaches in my research using stable and radioactive isotopic tracers, sensors of biochemical/physical properties and autonomous vehicles. My areas of expertise are interdisciplinary and include: influence of biological production on ocean chemistry, organic matter export into the ocean interior, C, N and O cycling in the surface ocean, and physical-biological (ecological) interactions.

After receiving my B.S. in Marine Chemistry from the Rosenstiel School of Marine and Atmospheric Science at the University of Miami in 2009, I earned my Ph.D (and M.S.) from the University of Southern California under the direction of Doug Hammond in August 2015 (2011). For my dissertation work, I was funded by grants from NSF and the International Association for Geochemistry to study the biological response to coastal upwelling in the Southern California Bight, mainly using mass balances of radioactive isotopes, sediment traps, O2/Ar and the three stable isotopes of dissolved oxygen.

I spent 2015-2018 as a postdoctoral researcher at UC Santa Barbara collaborating with Nicholas Nidzieko and Alyson Santoro to quantify the influence that internal waves have on vertical turbulent mixing of biologically limiting nutrients into the euphotic zone over the continental shelves using sensors on a propelled Autonomous Underwater Vehicle (AUV; pictured above). I also worked with the SBC-LTER to use a buoyancy-driven glider to quantify cross-shelf nutrient fluxes to the near-shore kelp forest ecosystems in coastal Southern California.

I was then a postdoctoral fellow at the Monterey Bay Aquarium Research Institute (MBARI) from 2018-2019 collaborating with Andrea Fassbender, Yui Takeshita, and Ken Johnson to use profiling floats equipped with O2, NO3–, bio-optical, and pH sensors to make budgets of biogeochemical tracers of carbon export in the Northeast Pacific. Above is a picture of myself and crew members of the CCGS John P. Tully recovering a damaged float. This project coincided with, and provide regional and historic hydrographic context for,  in-situ, ship-based and satellite-based export assessments made during the NASA EXPORTS study. Using this dataset, we evaluated the evolution of carbon export in distinct biogenic carbon pools over multiple timescales, which we hope will contribute to improved future satellite-based carbon export models.